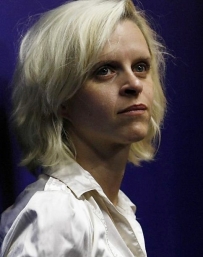 Born 1979 in Graz, Austria. After a year of studying photography in London, Caspar studied philosophy and psychology at the University of Vienna between 1998 and 2002. At the same time she was also studying multimedia art at the University of Applied Arts in Vienna, and painting and conceptual art at the Viennese Academy of Fine Arts. In 2003-2006 she completed her doctoral studies in Vienna and Paris, and in 2003 she also completed a one-year course of study in film with Michael Haneke in Vienna. In later years she lived and worked in Vienna and New York, and exhibited her paintings in Europe and the US. In 2007, her debut Who's afraid of Kathy Acker? was released.