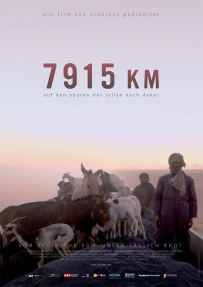 A motor sports spectacle which leaves a trail of dust. Guided by its coordinates and accompanied by a fading afterimage of the media event, the film sets off on a journey from Europe to Africa: Points of navigation and direction indicators become faces and landscapes, movement toward a destination becomes the goal itself.

While the rally covers the 11,000-kilometer route in 18 days, the film team will have three months for the same distance. In encounters the film will explore life in general, values and ethics, the North-South divide, everyday cares and worries, and visions of the future as well as European ideas and prejudices about Africans and vice versa.

7915 km is a film about the possibility of redefining well-traveled paths, about the not-too-distant reality of Africa and the unreal distance of reflection.