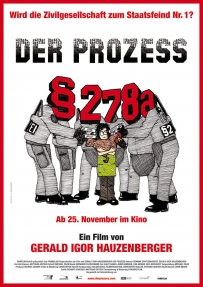 In 2010 Austrian animal-rights activists were suspected of terrorism and membership in a criminal organization and charged, because their acts of civil disobedience tested the boundaries of democracy and had an influence on domestic business. There were years of surveillance, 105 days spent in jail and more than a year in court, but no evidence that crimes were committed was ever produced. A Kafkaesque trial turned into a scandal involving the police and the judicial system. While they were completely acquitted of all charges, the activists were ruined financially.