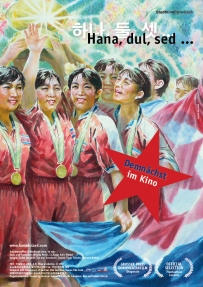 Ri Jong Hi, Ra Mi Ae, Jin Pyol Hi and Ri Hyang Ok live in Pyongyang. They play professional football. It guarantees them a living and gives them prestige. They're good at it and they love it. As members of the national side they represent a country seen by the world as a bizarre cult-of-personality farce. Often their international matches are dominated by attempts to retaliate for injuries sustained in wars long past.

The four regulars on their country's side were instrumental in the meteoric rise of North Korean women's football to figure among the best in the world. However, when they failed to qualify for the Olympics, their careers ended abruptly.
Now best friends Mi Ae and Hyang Ok don't see each other very often. But when they do, their old camaraderie returns immediately, and they stroll along the city's dark, grand boulevards, reminiscing and talking about life without their favorite sport.