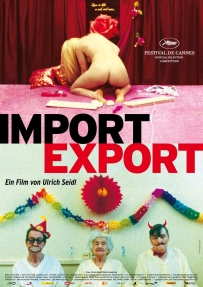 It's cold and gray. Wintertime. People are freezing. That's how it is here in Austria. That's how it is there in the Ukraine. Two different worlds that are increasingly coming to resemble each other. The East looks like the West, the West like the East.

The first is about Olga, a young nurse and mother. Olga wants more from life. She wants to get out of the city, out of the country. She decides to go to Austria, which she does. In this foreign country in the West, she finds work and then loses it. She starts as a housekeeper and ends up a cleaning lady in a geriatric hospital.

The other story is about Paul, a young Austrian. He finally lands a job as a security guard but gets fired almost immediately. He finds himself back at the Employment Office. He has debts and borrows more money, from friends, strangers and his stepfather, who takes him along on a job in the Ukraine setting up video gambling machines.