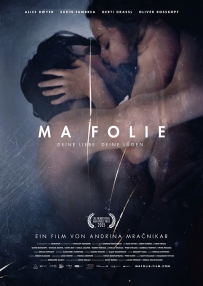 Hanna loves Yann and the 'lettres filmées' he sends her. Yann loves Hanna but mistrusts her. He leaves her but does not leave her alone. His 'lettres filmées' become a threat and Hanna does not know whom she can trust and whether she can still trust herself. Ma Folie starts as an 'amour fou' but step-by-step turns out to be a psychological thriller dealing with different ways of perception, trust and mistrust, imagination and delusion.