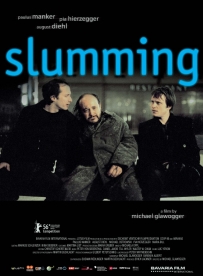 Rich slacker Sebastian's favorite sport is slumming in Vienna's seedy bars in search of quirky characters to toy with. He also likes seducing women over the internet with elaborate stories. His romance with Pia is jeapordized when she becomes angry about Sebastian's latest act of flippant cruelty: he and and his flatmate Alex picked up an unconscious drunk off the street and dumped him in the wintry Czech countryside without any ID. Pia decides to rescue this lost man, Kallmann, a down and out poet.