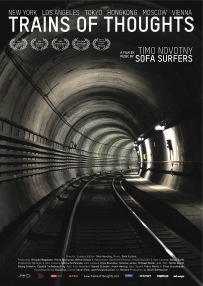 Trains of Thoughts is an audio-visual essay, which reflects upon and compares metro-systems around the world. It is an exploration of a world inside the world as well as the feelings fascination, obsession, fear, and themes of survival, control and silence that revolve it. The film will take you through New York, Los Angeles, Moscow, Vienna, Tokyo and Hongkong, unleashing the imagination at every destination with its distinctive palette of visuals and selection of sounds from Sofa Surfers.

"We shape the things we build, and forevermore they shape us" - Winston Churchill