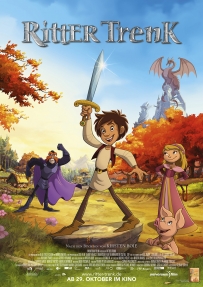 A charming little kingdom in the adventurous Middle Ages. Trenk is a brave young farmer's son, who doesn't want his family to live like serfs. Trenk bravely decides to travel to town with his little piglet in tow, to become a knight and to free his family from the cunning knight Wertolt the Furious. He smuggles himself into Castle Hohenlob to receive valuable training as a knight.