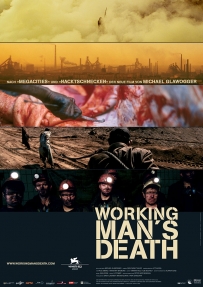 Is heavy manual labor disappearing or is it just becoming invisible?
Where can we still find it in the 21st century?
Workingman's Death follows the trail of the Heroes in the illegal mines of the Ukraine, sniffs out Ghost among the sulfur workers in Indonesia, finds itself face to face with Lions at a slaughterhouse in Nigeria, mingles with Brothers as they cut a huge oil tanker into pieces in Pakistan, and joins Chinese steel workers in hoping for a glorious Future.

Meanwhile, the future is now in Germany, where a major smelting plant of bygone days has been converted into a bright and shiny leisure park.

"Work can be many things. Often it is barely visible; sometimes, difficult to explain;and in many cases, impossible to portray. Hard manual labor is visible, explainable, portrayable. This is why I often think of it as the only real work." Michael Glawogger